The regeneration of the Lyng lay at the heart of key national, regional and local priorities.

The Lyng is an identifiable place in the history of West Bromwich, being first settled in the late 17th century and then absorbed into the industrial heartland of the Black Country during the Industrial Revolution.  In the 1960’s, slum clearance and redevelopment swept away the legacy of that period, replacing it with low medium and high rise blocks, which to many lacked a sense of place or identity.

However one very noticeable feature of the Lyng, which remains today, is its very strong community spirit.

In May 1995, Sandwell Metropolitan Borough Council (SMBC) embarked on a consultation exercise with the Lyng community to identify what needed to be done to regenerate the Lyng estate.   A major vehicle for this was the establishment of a Working Group involving residents.  Detailed resident consultation was held throughout 1996-97, producing a clear picture of needs and aspirations.

In order to satisfy the long-term ambitions of residents it was agreed that comprehensive redevelopment was the key to generating the right kind of opportunities, encouraging a more economically active mix of people onto the Lyng.  This would not only breathe new life into the Lyng, but also benefit the wider proposals being developed for West Bromwich Town Centre.

It was agreed by Sandwell MBC and the Working Group that the specific model for the regeneration of the Lyng would have to:

In January 1999, after further residential consultations, a group of 15-20 volunteers commenced an intensive training programme in order to prepare for the establishment of an organisation that would meet these requirements. Training included financial, technical and legal issues, both in terms of specific regeneration and development as well as the corporate functions that must be fulfilled as a Board Director.

The original Business Plan focused on the development and management of up to 200 homes at affordable rents although with a recognition that  should there be opportunities to extend its regeneration role to developing new homes for private sale or shared ownership, it would consider establishing a separate trading operation for that purpose.

To ensure the successful delivery of the Vision for the Lyng, the LCA Board and SMBC  adopted a set of clear interlinking objectives, against which all redevelopment and refurbishment proposals for the Lyng were appraised.

e)             To ensure an affordable, comfortable, healthy and safe environment

Over the past 15 years the Association with its partners has successfully delivered the original vision – a wider recognition of this has come from two significant awards :-

In 2014 the Lyng Redevelopment Project won the Housing Excellence – Best Regeneration Scheme Award and followed this up with the Builder and Engineer – Residential Project of the Year Award.

Added to this the Lyng Project also named as one of the twenty best developments in the West Midlands.

The role of the LCA has continued to evolve to enable it to develop other projects that benefit people living on the Lyng and the wider community. The Lyng today is a  desirable place to live with a vibrant community that is enjoying the benefits of a redevelopment that was based on local pride and a deep desire to create a great place to live and work. 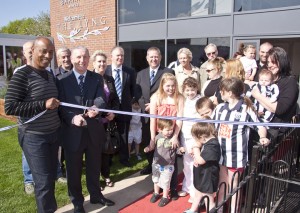